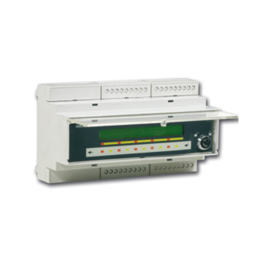 When first luminaires are connected into the system, the CU is able to check the installed luminaires and report the number of luminaires as well as the list of their corresponding identification codes.

Using the CM, all units in a CTOC system can be controlled from a PC. Beghelli supplies the appropriate software together with the CM.

Data transfer between the CU and the luminaires makes the following functions possible:
• operation and full duration testing of the luminaires
• enabling or disabling the emergency function
• system control
These functions can be performed separately for the total installation or for a zone. Results are shown on the display and a hard copy can be printed on demand. The CU can communicate with every luminaire by periodically running inquiry functions, advising the operator via display in the event of a one or more units of the system do not respond.
Luminaires are not affected if communication with CU is interrupted. As each unit is identified by a specific address, many installations can operate on a single power supply line.

The CU runs the operational test automatically or on a specific demand. The operator can use the CU to program the time lag between two automatic tests as well as the test timing.
During any test, the luminaire lights up for about one minute to verify the correct working of the fluorescent tube and the battery. The CU collects and stores any failure and reports to the operator via display or a print out, stating test day , test time and also type of failure and identification number of the luminaires involved. The multicoloured LED located on the front of the luminaire facilitates identification of the defective unit and also indicates (See AT section) the luminaire’s status.

The full duration test is run as the functionality test but, because the state of the luminaires’ battery is checked by the unit microprocessor, is longer ,collecting and storing any possible failure. Test results are shown on the display, as well as it’s possible to print out test date and time, type of failure and identification number of the luminaires involved.
The multicoloured LED located on the front of the luminaire facilitates identification of the defective unit and also indicates (See AT section) the luminaires status.The operator can program automatic testing frequency between 1 and 99 weeks or can run tests on demand.

The Beghelli Central Test Emergency Lighting System (CT) is a centralised emergency lighting system with centrally controlled self testing emergency luminaires.
CT performs the following functions:
• operational and full duration testing of the luminaires
• enabling or disabling the emergency function
• system control
CT can control up to 1024 units, including the Maintained (SA) and Non Maintained (SE). An interface booster is required every 64 units, to amplify the data signals.

A liquid cristal display (80 characters on 2 lines), a 24-column printer and a keyboard interface the operator with the CU. The display shows various selection menus to make easier the operator’s control, as well as the key to be pressed to start the various functions. A keyswitch located at the back of the keyboard can be used to prevent access by unauthorised persons. CT can be integrated into a centralised control system with a wider range of functions, or into a remote monitoring + control system via a telephone line. A two serial-line connectors (RS232) are located at the back of the CU. A sealed rechargeable 7,2V 1,2 Ah NiCd battery provides for 3 hours full duration in case of a power failure.

The CU is able to check when the first luminaires are connected into the system and report the number of luminaires as well as the list of their corresponding identification codes.
Control Module (CM) Using the CM, all units in a CT system can be controlled from a PC. Beghelli supplies the appropriate software together with the CM.

The connection between the Luminaires and Control Unit is achieved by means of an interface device that serves to amplify the signal and eliminate disturbance. The device can control up to 64 luminaires and occupies 6 DIN modules.

CT working is based on the interactive communication between the CU and each luminaire, carried out in a sequencial manner(polling) CU microprocessor sends messages on the data transmission line, recognised only by the appropriate codified luminaire. The unit microprocessor in the luminaire sends back a reply message, which is then analised by the CU.